The Moral of The Story.

The day my daughter was born, was perhaps one of the happiest  days of my life, I can remember exactly what song was on the radio, what the weather was like, what I had for lunch, even the nurses names. I also remember very clearly the smell and touch of that new born flesh and blood which I had help to create.

Unfortunately when kids are born, no hand book happens to pop out at the same time. You basically get home and , well, you are now a parent. I was determined to be the bast Dad I could.  My daughter is twelve now, growing every day, becoming more and more independent. She is loyal, loving kind, generous, and to be honest I could not ask for a better daughter.  So now I want to tell a story about something that happened when she was two years old, that taught  me a very valuable lesson, that I will never forget......

Just after her second birthday, we decide that we would start potty training her. The signs were all ready there that she was aware of the "need to go",. So we started the process. To be honest it was easy, from memory we only had one accident.   At night though we were still putting a nappy on her.

This was where it started getting frustrating, she was for ever taking if off , we never had any accidents, but it was annoying the hell out of me.  Every time I went into her bedroom I was having to put on a new nappy.

This particular night I walked in to her room, to find yet agin that she had removed her nappy, and I lost it with her. Told her off big time, thru another nappy on her and turned to walk out of her bedroom, only to see that she here potty was .........full.   The girl had removed her nappy to go toilet and when I walked in she was in the process of trying to put it back on.  I shall not for get the sinking feeling that came over me, here I was being a complete idiot, when all she had been trying to do was the right thing.

I learnt a valuable lesson that day, and I hope because of it I became a better Dad, ...........well at least one who likes to get the full story before passing judgement, and that is what they say is the moral of the story.
Posted by Roger at Tuesday, August 17, 2010 No comments:

Motorcycing, How I got started.

People often ask me how I got into motorcycling.   Well I was a bit of a late bloomer, I didnt even start thinking about motorcycles untill after I was married (29). The reason being is that my wife was mad keen on them, and because of that I got interested.

When I met her I was 27 and she was 21, She had sold her car and was riding a bike everywhere. Her mother was not impressed, but I must admit I found it rather cool.  We dated for a long time and  a couple of years later we got married, she still had the bike but also a car. Not long after we got married I decided I was keen to learn how to ride a bike. So off we went to a desearted carpark to give it ago.  I was not to know then, but it was the beginning of my love affair with riding bikes.

I learnt the basics pretty easily, and a in a fit of complete eagerness I went and brought a CBR 600, of course the fact I had no license, was of little interest to me, after all she had been riding for a few years and she still didn't have one, so I thought it carnt be all that bad!

Fast forwad a year, and she is pregnant with our first child, the CBR was sold, and we were bikeless, the first time since I had known her.  After our daughter was born, I relised I was still passionate about bikes, I recommended to here that we get a little 250, cause one day when the kids are older we will want to get some bikes, and have no licensses.

So off we went and brought a 250. I got my licnse about 9 months later, she got her's about 15 months later.

Five years later our second child had started school, feeling eager to get into some dort of hobbie and relising I needed her to do so also, I went and brought her a brand new ZX 636. It was a great bike, I got it delivered to here on a trailer with a big red ribbon on it.

Two weeks later it was over..........the marrige that is, she wanted some one else, and she wanted to be with him ,not me.   What followed was a very bitter and long divorce, after it was over I was homeless and bike less.

I moved into a two bedroom apartment, and I had my kids every second wednesday till sunday, but the weekend I didn't have the kids I was going nuts. Just nothing to do. My infrastructure of friends had broken down, and I felt very much the odd one out.

Remebering how much I loved the bike, I decided that I was going get back into it, and I did.   I brought a Triumph 955i, and as they say the rest is history.  I spent every weekend that I did not have the kids riding, meeting new people, and seeing the country from a new perspective. I have never looked back, nor will I. 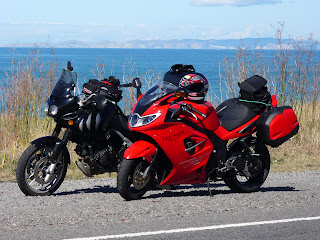 After all that my x wife has become very anti bikes,  her new partner hates them and it has rubbed off on her.....oh well....not my problem any more
Posted by Roger at Monday, August 16, 2010 2 comments: