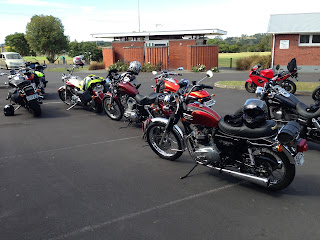 On Sunday I attended the Pro Rider training course in Albany.  This course is run by Pro rider who is the designated provider of subsidized training here in Auckland.  This is done through ACC (Accident Compensation Corporation) and Auckland Transport.  The cost to me personally was $50 with the remaining amount of $200 being subsidised.

Although I have done a lot of training over the last few years and have become an Observer for IAM,  I am always open to learn more and improve my skills.

I registered for the course a couple of weeks before the day and the returning email told me I would be sent an email out the week before confirming venue etc.  I did end up chasing up the information and eventually got it five days before.  I was surprised to see that even though I put done my level as "Experienced"..this course catered to all levels.   I really wondered how they were going to manage this.

When I arrived on Sunday I was again surprised to see just 4 instructors for 16 riders. I had expected a better ratio of instructors to riders .

The debrief consisted of a brief discussion on shoulder checks and road rules, before we were shown pictures of where to position our bike on corners.  There was no mention of the widely accepted I.P.S.G.A system of motorcycle roadcraft and control (Information, Position, Speed, Gear and Acceleration).  This surprised me as it is one of the fundamentals of road-craft training.   TUG was only briefly mentioned. (TUG is Take (information), Use (information), Give (information).

The five learners went off by themselves with another instructor and someone else to assist who had no qualifications to be teaching. (I know the person and skill level) This now left three instructors and 11 riders.

We initially rode out west where we would complete several circuits of the same road during the course of the day.  My previous doubts as to the level and skill of the instructors began to be raised when I witnessed one of them continually fail to indicate through three roundabouts  then ride through roadworks with a designated 30 km/hr speed limit at 70 km/hr .  I questioned him and he said that he was doing 50 kms per hour...moot point really.  Speed signs at road works are there for a reason.... didn't appreciate my bike getting showered with new gravel either.

I was beginning to get the impression that the level of training I have been getting and was expecting was not going to happen today.  In fact, it appeared that the more numbers that were being pushed through the better, with no real consideration of the training quality provided. Important topics were ignored or simple brushed over.Braking was covered with a three minute video at lunch as well as counter steering. No demonstration was given.

The day dragged on with very little feed back to riders.  Roadside debriefs consisted of short videos and more pictures to look at.   It was one thing to talk about stuff, it is another thing to be taught it, showed it, and given time to put it into practise.

I was further alarmed when being overtaken buy a guy on a 250cc motorbike through the same 30 km/hr work zone I have just mentioned,  showering my bike with stones and showing a blatant disregard for other road users. To rub salt in to the wound, none of the instructors mentioned it to him or confronted him about it.

Further frustration arose when I saw that the Pro rider leader was riding a bike that was not registered to be on the road.  I was informed that it was, but again it is a moot point. The bike as it stood is illegal for not displaying a current registration and should not be ridden on the road until it does.  This all coming from some one who is supposed to be setting an example and teaching safer road craft.

I was certainly getting frustrated at the amount of stuff that was not getting taught, or simply glossed over. And this is because the ratio of instructors to riders is too low and no proper training was ever going to happen.  The majority of the day was spent practicing on the same piece of road going around corners.  As the day drew to a close, I was disheartened to see three riders in front of me run compulsory stops signs. Again I think it reflects on a lack of proper instruction and a glossing over of the road rules at the beginning of the day.    How after 5 1/2 hours of so called training are riders still running stop signs....something seriously is lacking in the approach taken to this training.

By three o'clock I still had yet to receive any feedback on my riding, when I questioned this, I was told I was smooth but probably travelling too close to the centre  line on left hand bends.  I did mention that I get excellent visibility through the corner from there, and always give up the position for safety .....oh good he says.  End of conversation.

At the end of the ride I was given a certificate of completion, a smiley sticker on my dashboard  to remind to to smile, relax and enjoy the ride, and a photocopied picture of the vanishing point.....the first time it was mentioned during the whole day.   How the hell do you teach cornering with no emphasis on the vanishing point?  I was also given a book on other reading material and encouraged to check out You Tube videos.

My honest opinion is that the level of training was poor, too many riders, unskilled instructors, not enough attention given to individual riders,  all the time making a lot of money....taxpayer  funded money. To properly teach, demonstrate and assess  someone's riding,  one-on-one, or one-on-two coaching is the maximum you should expect.  The old adage "People don't know what they don't know"..certainly rings true with me today.

I make no apologies for the bluntness of this blog, I have stood beside too many graves of dead bikers to stand by and see sub-standard training become the norm  Regular readers will know that I am unashamedly passionate about motorcycle safety. Who is auditing these trainers, who is checking that what is being taught is of a high standard? Who is checking that tax money and ACC levies is being spent wisely?

ACC and Auckland Transport seriously need to assess where they are going with motorcycle training which measurably delivers value and high quality outcomes.  It makes me thankful of the training path which I embarked upon nearly 2 years ago. 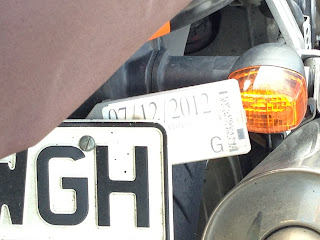