So last Sunday was Fathers day, old news I know, but not for being frantic at work this week I may have been able to write about it earlier.

I was given the delicacy of toast, baked beans and coffee.........with a slash of ham on the side.   All made with love and appreciation, which is all i can ask for.

Nathan had a friend over, so that breakfast was where fathers day started an ended for him, still Taylor was keen to go for a ride, and she even mentioned a  "long ride", dangerous words indeed. 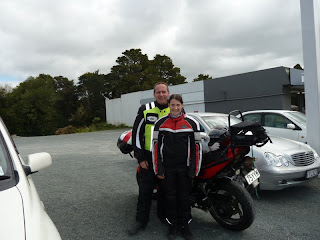 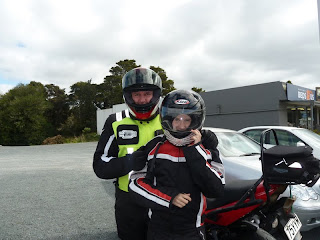 SO with Nathan off to his mates place, my partner working, Taylor and I headed north, stopping at the chocolate factory for a very yummy brunch.......(forgot photos sorry).  WE carried on north after that and took the scenic ride through Wellsford, SH 16 to Helensville, and eventually home.  we were away for about 6 hours, and Taylor didn't seem to mind in the slightest.  I think I may be turning her into a biker yet.  A few years ago anything longer than 20 Min's was considered a long trip.

It was great  to get out for a ride on what was a nice day with my daughter.  She seems to be growing up so fast that the time will come when she will be far to busy to come with me any more.

Soccer season has finally ended.  Taylor's team finished second from the bottom, but it was a great journey along the way.  Yesterday was the Girls 13th Grade prize giving.   Taylor won "Most Valuable player", I thought I should of won most "vocal sideline commentator" and supporter award, but it was not to be.


Still very proud of my girl, first season of football and she won a ward.