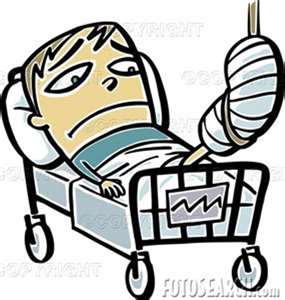 Don't worry, not recently.  But I thought I would relate top you all how I broke my leg a few years ago.

It was June 07, my marriage had broken up the year before, and it was before I got into biking.  With the breakdown of my marriage and only having my kids a few days a week, I found myself a bit lost in the evenings.  I was still going through the divorce so wasn't much fun to be around anyway.

We had finished a book programme at work which was for the Auckland Film Festival.  I have always enjoyed the off beat films, and have sat through some great ones that never made it to the commercial cinemas. I went through the book and circled a few that I wanted to watch.  So on the Thursday night I took myself off to Rialto theaters in New Market.

As I left the movie at about 11pm I tripped on the stars, I was to far away from the rail and I took off at a hundred miles an hour downwards, landing on the slate at the bottom and breaking my left leg in several places. Tiber and Fiber...compound fracture to make it worse.

The first ambulance that turned up was horrified to discover the seriousness of the break.  They were informed when first notified that it was just a sprain! Doh....bloody bone sticking out of my leg.  They radioed for another as they didn't carry any morphine.  While he was waiting he informed me they were going to cut my jeans off, "beg your pardon" I said, "we need to cut your jeans off",  "like hell" I said, "these are my G-Stars and cost me $300 , just unpick the seams"!  No luck though and off they came.

"You have quite a sense of humor for a man who's leg is facing the wrong way".

"Hell you should see me pissed, I am hilarious"

Finally I went off to hospital where they operated for 6 hours putting it all back together.  10 days in hospital. 3 months non weight bearing on crutches.  Man I had triceps that Brad Pitt would be proud of, but what a mission living on my own with a broken leg. The surgeon thought I had smashed it up on a motorbike, I must admit that bit sounded better than telling people I broke it falling down bloody stairs. As soon as I could I was up and about on the crutches.  I hobbled down to the hospital cafeteria as I was hanging out for a pie.....but then dropped it.  All that work for nothing.

Took me an hour in the morning just to have a shower.  Trying to get a cup of coffee from the kitchen to the lounge meant re organizing the furniture so I could strategically place coffee cup, then hop a long.

I still can't run properly, which is fine cause I am not keen on running anyway.  I don't think the leg will ever be a 100% but hey, you just have to get on with it.  As they say , life is like a box of chocolates!