In this ever increasing nanny state we live in, I have found that motorbiking and kids go together.  I am sure the politically correct will beg to differ.

My son has struggled with his learning for some years, I would hate to think how much money has been spent trying to get him the proper help.  In the end when he was finally diagnosed the kid was so far behind at school, that we have had a long slog  playing catch up.  It is fair to say that he has improved quite considerably.  But we still have a way to go.

He is actually quit a bright kid, it was just trouble with his eyes that has caused all the delay, but he amazes me with the stuff he does know.

Coming from a split marriage, the hardest thing I have had to do was trying to connect with my children, I had no problem with my daughter but I had real issues trying to feel connected with my son.  They are in my care 5 days a fortnight, and it can be a busy few days!

I found that when I got into motorcycling,  My son showed a devoted interest also.  Something that I had not seen in him before.   In fact he became quite passionate about my bikes and all things biking.   He was only six at the time and I felt he was to young to take for rides.  The time he was 8 I decided he was tall enough to take riding.

At first we just went for small trips down to the mall, maybe into town.  On our first decent trip out to Kiuawa proved to be a challenge.  A bit of education was required on what a pillion passenger does and doesn't do!    He had this great idea that every time we went around a corner he would flop to that side, then repeat on the next.   Certainly unsettled the bike.

After a few miles and a couple of lessons he has become the perfect pillion. In fact I forget he is there sometimes, and I need to reach back and  touch his leg to reassure myself!

Our first weekend away together on the bike was awesome.    I had all ready taken my daughter to Wellington for the weekend previously (we  Flew), and asked Nathan what he wanted to do,  fly some where or go on the bike.    There was no hesitation when he said he wanted to go riding!! 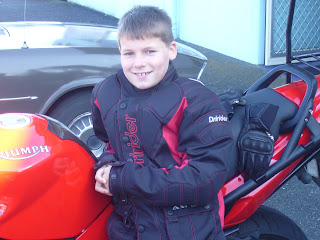 Nathan with the bike.

We had a terrific weekend in Rotorua, and I felt that we had started to connect again.  We did all the great things a father and son should!   We have done many miles since.  Yes I realize there is a danger when we are on the bike, I have certainly been given grief from certain persons about the risks. 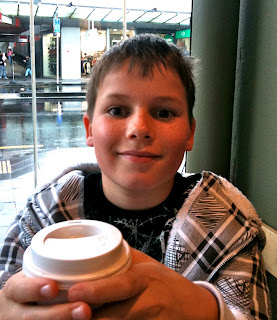 But for me introducing my son to the joys of motorcycling has helped our relationship immensely.  Sharing a common interest has brought us closer together.  He will even sit a watch Moto Gp with me!
Posted by Roger at Friday, October 08, 2010