The Weekend that was.

This weekend just gone I had my kids.   I pick them up on a Wednesday night and they go back to their mothers on the Sunday night.  This weekend was a bit different for a couple of reasons.

First Taylor decided she wanted to go for a ride on the bike.  She has never been that keen to go riding with me, and I have certainly never pushed her.  Her mother has done enough to scare her into all the possible worse case things that can happen.

Anyway this weekend she wanted a ride.  So she got suited up and we headed off to Clevedon, Maratai and the Pine Harbour Marina for some lunch.  Incidentally Pine harbour is the nicest marina in Auckland, has a great cafe, and also a pub (The Jolly Roger....hm mm wonder why I like it).  Looks out onto the harbour and all the moored boats.  It is a beautiful place. 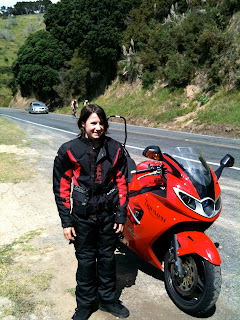 I took it slow, and when we got to the Marina for lunch Taylor asked me why I was riding like a Nana? Some times you just can't win!    Anyway we left and headed back home.    It is only about 15kms, but we encounter some lovely bends.  One in particular, banks around on it self as it climbs up the hill.  We stopped at the round about just before it and I warned Taylor that it was a good corner and the bike will be leaning a bit.  Well to cut a long story short, we ended up doing the corner three times, she loved it.  As soon as we got home she was on Face book telling her friends how great is is to go round corners on a bike.  Oh Boy..what have I started.  Thankfully her mother does not use face book.

The second thing which we did which was great , was the Weetbix Triathlon for kids.  Nathan wasn't interested, but Taylor had entered.  So at 6.00am Sunday morning we were up and heading into mission bay on the Auckland water front.  It was a very well organised event with over three thousand kids taking part and that was just the Auckland Central venue.  Taylor did brilliantly and completed the 200mtre swim, 8km bike ride and 1.2km run is just over 35 minutes....go girl!  It was a hot day and a long morning , but well worth it.  Valerie Adams was there giving out the medals to all the finishes.  If you do not know of her she is an Olympic Gold medallist in the shot put.  Very approachable, friendly and giving of her time. 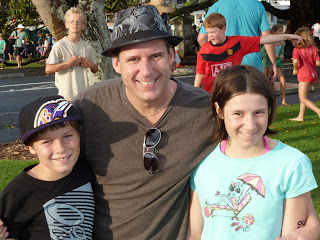 McDonald's for lunch, and  an afternoon nap for Dad...before we went to the park to play rugby.