These pics were taken by a spy camera after the recent IAM ride. 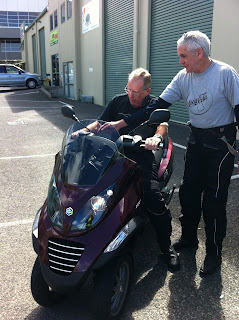 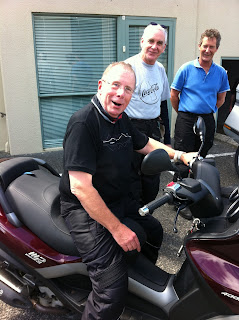 The pics, taken from high altitude with a high powered lens reveal a Mr Geoff James (recently retired international blogger)  seen checking out a Piaggio MP3.  He was also seen riding it around the car park. No pics were available of this as security was tightened beforehand. Sources reveal he was "quite taken" by the little 3 wheeled scooter.

A source close to the days events also reveal that Mr James had recently ridden a Triumph Bonneville America, and was quoted as saying that "the feet out front position was very comfortable".

Rumors persisted that the Street Triple was becoming far to much of a sexy beast for Mr James to handle. Although when approached for comment, Mr James refused.