I needed to go to New Plymouth to pick up my bike, I was getting some work done to it (Blog to follow).  I decided that it would be a good time for me and Nathan to have a bit of a road trip, kind of father son weekend away.  Nathan is always up for a ride, although I was a bit worried about the distant.The longest we had done was two hours, and lots of small rides.  A couple hours here and there is one thing,  a whole weekend on the bike is a bit more adventurous.  Still he seemed some what keen, and before I had had a chance to worry about it I had booked tickets, and organised some where to stay on Saturday night. 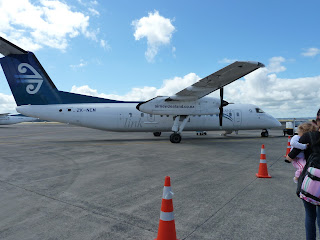 My partner droped us off at the airport Saturday morning.  The plane trip as far as Nathan was concerned was just as big as an adventure than the bike ride that was to follow.  Actually I havedone a fair bit of travel myself yet I still get excited to get on a plane!

We arrived in New Plymouth around 11, to a cloudy day that was deteriorating.  Drizzle with rain forecast.  My friend John picked us up and dropped us off to get the bike.  After a coffee and a yak, it was now raining and as we suited up I realised I had left Nathan's jacket linings behind, not a particular auspicious start. We left and headed up the coast. I was at this stage still not sure what route I would take, it depended on weather and how Nathan handled the ride.  I had checked the forecast before I left and was sure the further north and east we travelled the better the weather would get.  This was indeed the case, as we turned inland and as we hit the Awakino gorge the roads were in fact dry and the annoying drizzle finally ceased.


View My Saved Places in a larger map

Before this though at Mt Messenger I stopped and put a rather large sweat shirt under Nathans jacket, it was not overly cold but the last thing I wanted was him getting cold. This seemed to do the trick, and in his words he was very toastie!

With the bad weather and Nathan on the back,  I had been riding very tentatively, a little to much.  As the weather cleared,  I was able to relax and began to enjoy the ride.   Doing my best to keep my speed down.  Still I was hearing murmurs of delight coming from over my shoulder every time we went around a decent corner.   If you ever get to ask Nathan what he likes best about being on the bike , his answer will allways be ......corners!

We arrived in Pio Pio , and as yet I had heard no complaints which I considered amazing as it was almost three and we hadn't had lunch!    There is a nice cafe in Pio Pio, called the Fat Pigeon . We had a very enjoyable lunch and chatted about all sort of things that Nathan wanted to talk about.  I was also very much enjoying my time on the bike and with him.  One on one time I have learn't, is to be treasured.

After leaving lunch we carried on to 8 mile junction turning right and headed towards Taumaruni, this was not to be out destination.  John had recommended turning left about 5kms up the road onto Pukerimu road, which takes you out the back and eventually hooks you up with Sh 30 taking you through Bennydale and eventually Taupo.   I have always enjoyed this road, there is hardly any traffic on it, and given the right circumstances can be a real blast.  We took it leisurely  stopping at Whakamaru for Ice cream.

First order of the night was to slide into the hot pools at the motel. What a very relaxing end to what had been a great day.  From there we headed in to town to enjoy one of Nathans favourites dishes.......curry! And it needs to be hot, no butter chicken for this boy.  Strange but true, there is nothing  Nathan loves more than a hot spicy curry.

After watching a movie on TV we both fell asleep on the bed, it was 9.30 ( I am turning into a Nana)

Perhaps it was the early night but the next morning we found ourselves at McDonald's at 7.30 watching the All Blacks Vs Scotland game and munching on a Bacon and Egg McMuffin.
﻿﻿﻿﻿﻿﻿﻿﻿
﻿﻿﻿﻿﻿﻿﻿﻿
We headed home up SHW 1, turned off to go back towards Te Kuiti,we stopped and had a look at the Whakamaru power station.   From there we headed towards Te Awamutu, stopping at yet another power station , Waipapa. Hadn't ridden this road in a while and it had begun to drizzle so had to take it very easy as the roads were wet and greasy.  This is where I had to bluff about how much knowledge I actually had about Hydro Power stations.!! 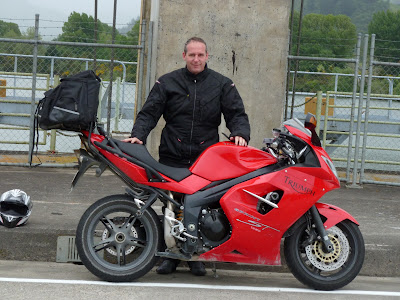 We stopped at Te Awamutu for a coffee, I think Nathan was getting a bit worn out at this stage, so I decided to take the direct route home. I was very proud of the little fella, this was the first time that he had complained that he had a sore butt!!

We got back into Auckland after lunch, and had a very quiet afternoon.

For those that are contemplating taking there son or daughter for a decent road trip, here are a few tips that I have learnt.

1) Ride with confidence, but at a safe speed. My attempt to ride very slow was unnatural, and I found myself being to tentative and riding poorly. Once I had settled into a consistant groove, I felt better and rode better.

2) Try to pick a good weekend weather wise. It helps. Saying that don't be be put off by the odd shower.

3) Get some good gear for them, easier said than done I know. But if the child is warm and comfortable, and you know they have the right gear on, you feel better and more confident.

4) Stop often.  Just because you can go for 2-3hours with out a stop doesn't mean the little one can.