You better watch out.... 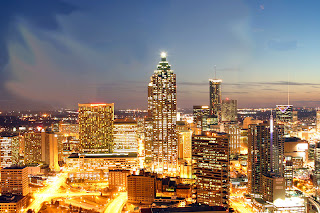 
cause I am coming over to the States at Christmas.    I must be insane, surely I should be out riding great roads in the midst of the kiwi summer.  But no, not me, why not do some thing different.  Got me ETSA today, because Kiwis are such loveley people and are highly unlikely to ever invade the USA we are actually welcome.

So I am off to visit some bloggers and other poor unsuspecting friends in the land of eternal straight roads.  Poor Lori from Atlanta , (Had to google where it is)  will be the first victim of my kiwi humor and intelligent wit.  And she is even throwing in  a trip to Savannah..apparently we are staying in a motel that has it's own ghost, I hope the ghost likes really funny kiwi gay guys!

Of course with the American peso almost on par with the kiwi yuan why not visit San Francisco as well which is where I will spend  six days.   There are vicious romours that a unplanned blogger convention is on the cards for the weekend  of the 5th and 6th january....I have it it on unreliable authority that Mr Bob, beautiful Brandy and hubby Brad may be floating around.....Perhaps who knows who else may turn up. Maybe even Sonja will show....  On the bright side nobody can say they couldnt come cause it was to far.....not as far as 8000miles for me!

Yes I know,  why abandon the kiwi summer for the states...well I just feel sorry for there struggling economy so thought I would contibute a small part of the recovery plan....I can assure you it will be small as I am staying budget everywhere.

So there you go holiday plans revealed......apparantly according to the very nice guy at NZ customs I am not allowed to bring the cat....bummer really I am sure he would of sorted the ghost problem.

I am very much looking forward to meeting some great friends who i all ready feel I know well face to face.  So just an informal invite for that weekend in San Fran in case anyone else would like to join....Richard....George.....Keith.....I know I know to far..buy hey no harm in asking.....