For some time now I have been trying to plan at trip to the Cape. Work, weather, kids and all sorts of other issues have all played a part in me not being able to go.   Finally this weekend all that was put aside and the weather gods cooperated. So Thursday I planned a route, and a quick phone call to Jean & Gary, to see if they wanted to join us, and we were all set.

So Friday night we headed north, to spend the night with my mum and dad, Jean & Gary were going to meet us Saturday at the Mobil in Warkworth. 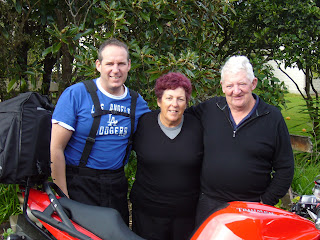 Me and the folks.


We both refuelled, and headed north. Gary and Jean on their Bonnie, and us on Beth.  I was eyeing the weather cautiously.  The weather forecast was good, but there was still the prospect of a few showers. I knew that the further  north we got the better the weather would be.   And so it happens, a brief shower when we left Warkworth and another as we turn off towards Dargiville. Thankfully that was it, although we still encountered some very strong winds.  One gust in particular sent us both swerving towards the gutter!

Once in Dargiville it was time for our first stop, and the coffee was great, the muffin on the other hand was crap. But hey.....I didn't come for the food. 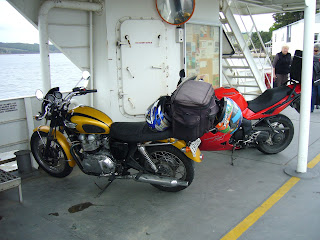 The bikes on the ferry from Rawene.


The route I had chosen would take us through the Waipoua Forest.  I had always wanted to see Tane Mahuta.  It didn't disappoint. Certainly an awesome sight, and a bloody big tree to boot.  The ride through the forrest is very tight, yet very pretty, with plenty of other kauris to be seen a long the way.  Well worth the look.  One can only imagine what this Forest must of looked like before the white man came! 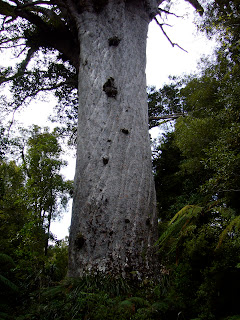 Tana Mahuta ( God of the forest)

Carrying on towards Opononi, where you are met with a stunning view just south of this town as you come over the hill.  With the wind up and the waves roaring in it, the sun shining, it was a spectacular sight. A great ride also.  Through Opononi we headed towards Rawene where we caugt the ferry to the other side.  Stopping in Kohukohu for lunch. ( Carn't remember the place but the food was terriffic!)   With only 65 kms to Kaitaia we were making good time.......the cape was beckoning!


We carried on north via Herekino.  This would be a fantastic road, except the condition of it was crap. Lots of uneven surfaces, pot holes and generally a mess.  It is a pleasant enough ride but dissappointing because of its condtion.   We arrived in Kataia just before four.  A quick discussion was undertaken to ensure all pillion passagers were keen to continue to the cape, which they were.........later the were a few compalints though!! 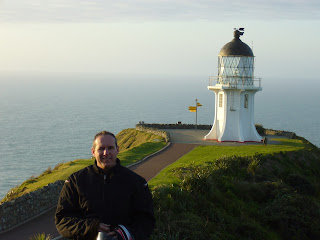 What a great road this is up to the Cape, newly sealed all the way, fast and sweeping bends, with glimpses of impresive scenery, depending on which way you were looking the Tasman sea to the left and the Pacific to the right.  Got hit with a bit of sun strike for the last half hour, due to the time.   But once arriving at the Cape it made all worth while.  We were greeted with the sun setting and surf rolling in down below.  A lot of money has been spent tidying up this area, and a new path leading down to the light house is impressive.  It is now a very tidy and excellent tourist attraction, and well worth the visit. The views are stunning. There is almost a spiritual feel about the place.  Perhaps that was just me. 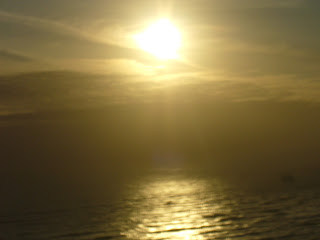 
It was now close to seven and dusk was upon us.  The journey back to the hotel was slow, the headlights on the sprint are only average, high beam non existance, my visor was covered in bugs with in minutes of leaving the cape.  So we took it slow.  Getting back just after 8.

We had covered over 550kms for the day, with a lot of the riding being very intense. We were all buggered, but a couple of wines and hot shower and all the aches and pains were forgotten, We sat and talked about how great it had been to do it, and a sense of accomplishment filled me. What a great day it had been. 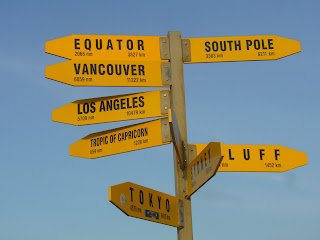 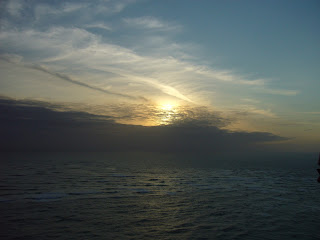 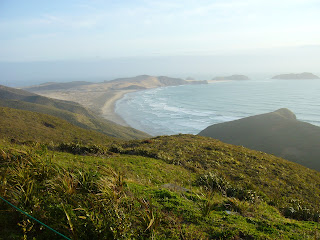