I got up early....did I say early, I mean the middle of the dam night s I could join the Northern Gravel Riders  club for the weekend.  We were heading towards Pouto beach, west of Dargaville  We were to meet the other riders at Dargaville at nine a good full 2 1/2 half hours from Auckland.  This is where our ride would begin from. As always though it was a bit of an adventure.......

The ride from Kumeu along Sh 16 was in some the foggiest conditions I had every ridden in. The view from the top however was spectacular.  Looking down and seeing the land covered in fog was quite amazing. Never seen anything like it before. 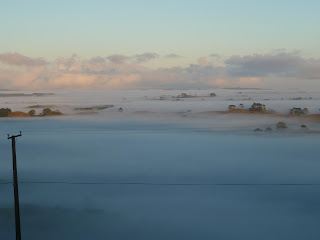 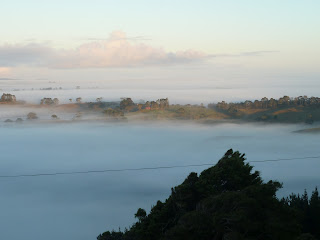 Once in Dargiville we met up with the rest of the team, about 10 of us in total.  We spent the morning criss crossing various gravel roads as we headed towards Pouto Beach.

After a regroup and just some twenty kms from the beach, we encountered some heavily gravelled, marbly roads. It was here while negotiating a sharp off camber, down hill section that I lost control of the back of the bike.  The time I regained control I was on the very edge of the gravel before another slide ensured and I launched of the edge of the road and down the bank, coming to rest nicely against the fence.

Tim and Jess who were following came to a sliding stop and were quick to check on me.  I was up quickly and reassessing the bike in the ditch, and checking what was hurting.  Ankle was a bit sore as was my shoulder, other wise nothing too major.  Tim was able to ride the bike out of the ditch.  Only minor damage to report, broken nose cone, and the handle bar slightly bent.  Not major and easily fixed.  (So I m reliable informed)

So we were off again...Rogeys Gravel Rash adventures had well and truly began.!!!! 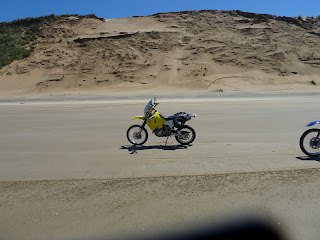 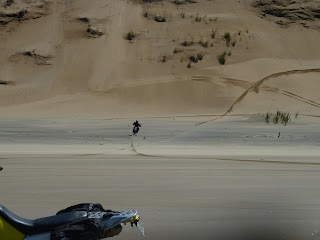 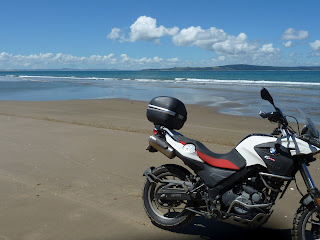 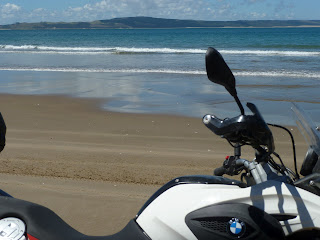 The sand crossing onto Pouto was not difficult, (although some how managed to make a mess of it) and the guys were having a great play up and down the dunes, some getting as far as the light house.  I was amazed to be honest. It is a lot steeper than it looks and takes a bit of skill to traverse it.  We spent quite a bit of time  playing before Jim suggested we ride "just up the beach" where we would return to the tarmac  and have lunch at Bayleys beach.

Of course when Jim says anything I have learnt to be sceptical..as "just up the beach" was in fact 80kms of blatting along the sand and having fun.  I seriously did wonder when we would get to the end though!

A truly great ride along the beach, just a neat feeling and seeing a fantastic beach with hardly anybody on it.  It was stunning.

Lunch at Baylys beach, before heading back to Dargiville to refuel.  It was here I decided I had done my dash for the day, and I headed toward our Accommodation.  Kauri Coast Top Ten.  This camp ground nestled  just off the main road is a wonderful place to stay......just be warned camp mother can be a bit .......

I managed to get my boot off OK, and kept it up and packed with ice  for most of the night.  Seemed better in the morning and I was able to ride home no problems.

We had all brought stuff for the BBQ, and it was great to sit around, tell lies, eat  lots of great food, and have a good laugh.

I enjoyed my self very much this weekend.  Surprisingly I actually believe my gravel skills are improving all the time.  I will learn from it, analyse where I went wrong and just get on with riding, besides kind of addicted now. 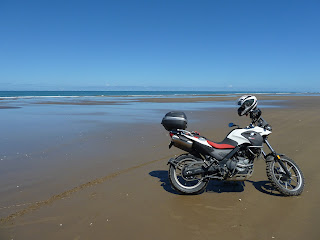 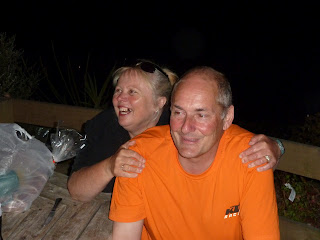 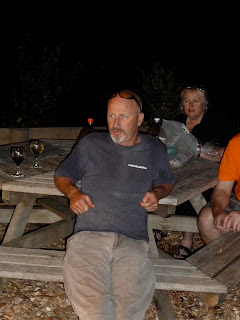 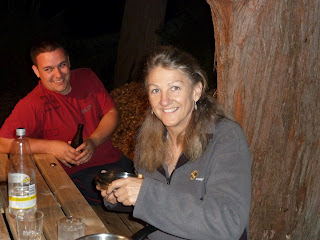 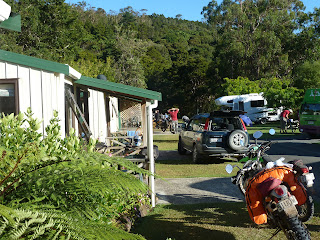