It has been raining a lot.  Did I say a lot?  Yes a lot. I don't think I have ever seen it as wet as it has been the last couple of months, we may have had an awesome summer but we are making up for it now.

Normally our winters aren't to bad.  Certainly motorbike riding is  not out of the question.  But the roads have not had a chance to dry out and it is evident by some slippery and slimy roads.  Geoff was talking the other day about taking a couple of associates out for IAM and both had traction issues.

So apart from a few IAM runs my motorbiking has been limited.  This has of course given me the opportunity to settle into the new house, set up my we man cave and do a few things to the bikes.  Finally getting around to setting up the GPS on the 650 and other electrical gadgets on the k1200.....u know what I mean, fish finders and the like!  It is also a good time to sit down and start planning a few bike trips.  Very keen to hit the South Island again this year on the 650 so I can explore some of the great back road leading up to the high country.  Roads like the Molesworth road  are places I haven't seen or ridden. I want to concentrate on the upper South Island taking in the Nelson lakes etc.

There is something to be said for a small home. Easy to manage and run.  Very happy I must say. 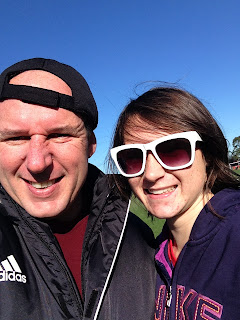 With the soccer season in full swing,   the week with the kids is taken up with endless football training's and games for Taylor.  Meanwhile Nat has joined the sea scouts and decided mountain biking is what he wants to do...which means Dad has to do it to....shit.  Should be fun I suppose and we do have some decent tracks close by.  I just do prefer an engine when sitting on two wheels.

Hopefully some decent motorbike blods to follow soon.....as soon as spring gets here!