Anniversary in Auckland arrived, and on Friday night to greet the long weekend Cyclone Wilma brushed along the top of the country causing slips , flooding and general havoc.  You got to love our summers.

During the week I had been in touch with Nick about heading off for a ride on the weekend.  Ironically Nick is an old friend of my partner who I had met before, and didn't realise he was following my blog until I clicked on his profile one day.    So it was a great opportunity to go for a ride together and get to know each other a lot more.  Nick is just as passionate about biking as I, and the two days we were away, we were never short of conversation or enthusiasm....and lets be honest, biking is not just about the ride but the people you meet and the places you see.

Due to the weather still being average on Saturday we decided we would go for a run on the Sunday and Monday.  Wanganui seem like a place to head to, an easy and enjoyable 460km run.

Saturday dawned brilliantly and we met at the Papakura Autobahn, where we enjoyed a McDonald's brekki, and discussed the days riding.  We headed south down the southern motorway, turning off at Glenmurry where we stopped for a quick photo shoot, and yet more gas bagging and talk about bikes. 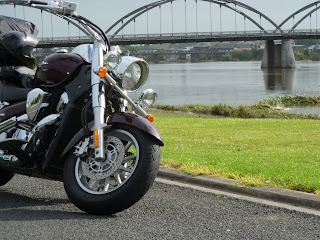 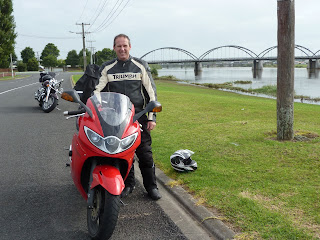 We followed the normal route through Te Kuiti, Taumarnui, past National park, where we took a small diversion to Ohakune for lunch.  I love Ohakune, it has a fantastic feel about the place, and I know in the winter with it's close proximity to the mountains it would be a happening place for the snowboarders and skiers.

We continued south and once again the Paraparas threw up her own surprises, with some very heavy road works, and slips that had been cleared, but the tell tale signs of mud and crap remain.  Sill it was a great ride, and we arrived into a sleepy Wanganui late Sunday afternoon.  We found a motel and I sent Nick off to get some "light"refreshments.  The rest of the afternoon was spent sitting out side enjoying our drink and discussing how we will change the world by riding around it!

We headed off to find some dinner, and had an excellent meal at "Angora Mediterranean " restaurant.  The food and service was second to done, and although I have often commented on excellent places to eat, I would definitely recommend this place.  It was exceptional.    The "Black Russian's" hit the spot also.

We hit the road early the next morning, with the weather forecast predicting rain and heavy winds, we were lucky in as such we only every encountered heavy wind and nothing else.  Not that Nick on Violet would of noticed, it takes a bit of wind to move a 300kg bike of its mark.  We followed the same road home, and enjoyed a great breakfast in Taumarnui.  We followed each other all the way until my tun off for home. 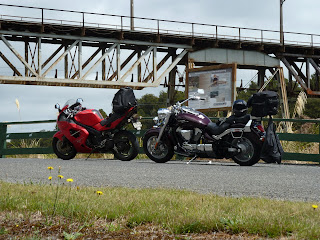 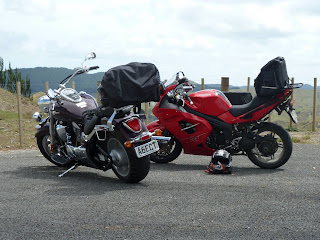 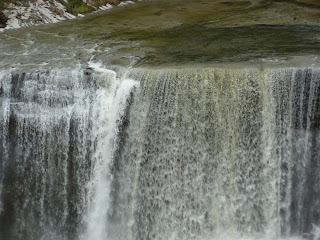 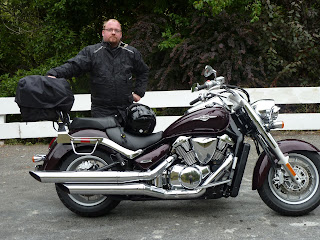 It was a great 36 hours away on the bike, and it felt more like a three day weekend away than just overnight.  Nick was great company, and threw the Violet around corners like it's a street triple!!
Posted by Roger at Monday, January 31, 2011