I headed off on Friday and decided that Taupo would be my destination for Friday night, from there I had plans to head further south , drop my gear at a mates place in Fielding then continue through to Castle Point out on the coast.
I had a nice cruisey ride to Taupo on Friday night getting into the motel about eight.  Even though I only went down SHW1 it was still enjoyable, but one must keep alert as revenue gathers lurk behind trees and all sorts.  My detector saved on me on two occasions.  It is a pain really, as there was very little traffic and the bike was just singing along.  I travelled it at a brisk pace, but still needed to watch the speed. There is something to be said for riding in the evening, it's cooler and after a week of work it is relaxing, the worriesof the week disappear as you round each corner.The memory of a stressfull week left behind as the kilometers mount.
Once arriving in Taupo I was greeted to the news of the earth quake in Japan.  The footage was unbelievable as many as you would have seen.  My heart goes out to those people and I am sure it is going to be a tragically high death toll. 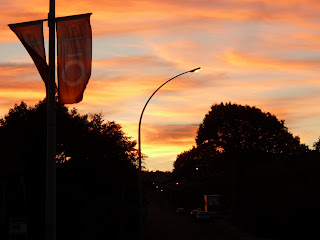 On Saturday morning I awoke to another stunning day, and continued my journey south, passing through Turangi then stopping at Waiouru for some brekki.  The central plateau was indeed cold and I hadn't been prepared for such a drop in temperatures.  I went out to the bike after breakfast and noticed it was sitting rather low to the ground......the back tyre was flat!  I have a puncture repair kit on the bike and once I located the stone that had caused the damaged I went about fixing the problem.  Using the "Dog Turd" method which is rather crude but very effective.  I put the last CO2 canister in the tyre and took the bike over to the gas station  to top up the air further.
I decided it was not prudent to continue travelling south, I had no more canisters with me, and even though I was confident that the repair would last I decided that it was better for me to head back to Auckland and get the tyre fixed properly.
I left Waiouru and went through national park, Ohakune , then Taumarnui , Te Kuiti then home.  Even riding at a reduced speed I had a great and enjoyable ride.  I got back into Auckland about three,  and in my short, but interesting 24 hours I had covered 850kms.  These are just fantastic roads to ride, lovely sweeping corners and little traffic.  You also get wonderful view of the mountains.
This is the fourth time I have had to use the puncture repair kit, twice for myself, and twice for other stranded bikers.  They are a very handy thing to carry on New Zealands bumpy and sometimes crappy roads.
Unfortunatly I didnt stop and take many photos, just a couple as I left Taupo as the sun was rising.
View Larger Map
Posted by Roger at Sunday, March 13, 2011