Now the first thing I am going to say is that I am no expert on these matters.  I can only relate in non technical terms the problems I have had and the issues which concerned me.  Pre load, rebound, damping etc all this terms I dont relate to.

One of the most disappointing things about my bike has always been the suspension.  I have met and talked to many sprint owners and have never found one that is happy with the suspension on these bikes.  Don't get me wrong, I love the bike , the engine is superb, the ergonomics are great and I have always loved the sound and the look of it.  It is a great bike for touring and having a fang.

Perhaps they are built for more smoother roads than what we get here in En zed, but the bike certainly does not like our bumpy roads.  This has always annoyed me immensely, and the simple fact that the bike does not handle well, does nothing for your confidence as a rider.

To start with, the back of the bike is very saggy, by saying that I mean the moment you sit on it the side stand would hit the ground, if my partner also sat on it, and with luggage, it would be impossible to get the side stand up. No amount of adjustment  ( and there is very little anyway) would solve this problem.   At nearly 30000 kms I was of the opinion that the rear shock was well past its used by date anyway.  I suppose you could say that it is soft, yet when you go over a decent pot hole, the jarring and impact is well and truly felt.

After a 1000km weekend, you felt as if your body, not the bike was absorbing all the  bumps, and I often found I had a sore back and butt, not from the riding position of the bike, but from the continual bumping up and down,  To put a technical term on it , bump compliance was crap!

This issue alone, causes issues with the front, the weight on the back forces the front end up, and no amount of adjustment with the front forks can solve this problem.   This creates a very light front end, one up it was tolerable,  two up it almost becomes un rideable.  Perhaps that seems a bit harsh, but that is honestly how I felt.

I would often suffer from massive under steer at the front,  would not hold my lines correctly, and be constantly correcting while cornering.  The light front end was perhaps my biggest concern.  I also noticed that the front tyre would not wear evenly.   Almost getting out of shape.

I had brought the bike with the intention of keeping it for some time, (as you do),  so with that in mind I made the decision to improve the suspension.   I think most bikes regardless of what you buy can do with an upgrade anyway.   I read with great disappointment that the new GT Sprint suspension has had very poor wright ups.  It is annoying that after spending $22000 odd on a brand new bike, you then have to spend a further couple of thousand just to get a decent ride.

This was not gonna be cheap, but all things considered I organised to get the bike to CKT in New Plymouth, where a new rear shock was to be installed, and the front forks re valved etc.  Basically I wanted them to weave there magic.

So on Saturday I arrived in New Plymouth, My friend John picked Nathan and I  up, and took us to get the bike.   Strangely enough the moment I saw it, it looked taller!  I had a look quick look at the adjustments, and the unit itself at the rear.   By this stage of the proceedings, I was itching to get on it and take it for a ride.

Immediately I noticed two things different, the first is that I felt taller some how, a bit perched up, secondly,  how nice, firm and planted the bike felt just sitting on it.  No bounch up and down stuff.  It was quite definitely stiffer.  There was  a huge and I mean huge, noticeable, difference to how the bike felt previous.

With my son with me, Robert suggested winding on a bit of pre load, and with that the bike stiffened more, when Nathan got on the bike never moved, as in the down ward motion.

Once on the road the first thing that grabs your attention, is how easily the bike handles bump. It seems to absorb them, it makes for a very smooth ride.    As it was raining I took it slow on the way to Taupo, just getting use to the different feel the bike now had.   The front end feels so much more planted and seems to hold lines far better( Perhaps this is me).  It is has far more feel than prev ious.  After an hour I stopped and wound on another click of pre load at the back.  These felt even better.

The great thing about these Ohlins is the ease of use, preload and rebound are so easily accessible and one simple turn alters something.  Also the shock can be removed and serviced, where as the old shock once worn would need replacing. 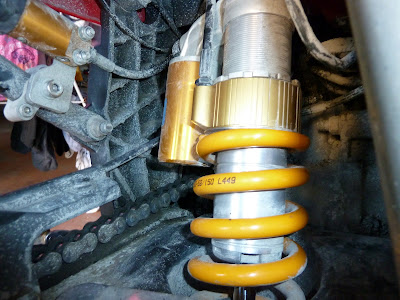 Once back in Auckland I continued experimenting with altering the settings to what I felt best.  I have wound the front forks down 1 turn, and 1 click of preload seems to suit me just fine for one up,  I will experiment with the preload at the back on the next weekend away with my partner.

So was it worth it, In a word ABSOLUTELY!  The bike is a completely different bike to ride, the feel, feedback, firmness and bump compliance is just brilliant.  It has made what was a good bike, into a superb bike to ride.  For a layman like me it is hard to explain (but I hope I have) just what a extraordinary difference this has made.  John said to me in New Pymouth, "The best way to get a new bike, is to improve the suspension in the old one".  Never a truer word said!
Posted by Roger at Thursday, November 18, 2010