Late Friday night I dropped my partner off at the airport, for a direct flight to London, where they will be working for the next three months.  Of course this left we with a free weekend and an opportunity to go away on the bike and do some riding and exploring.
I had decided that Taranaki was a good place to go, and in particular the forgotten highway.  I had not been down it before and having read Geoff's post on it late last year it seemed a good option.
I departed Auckland at 6.30am on the Saturday morning.  I have always been an early starter, and I like riding at this time of day.  I went south following a boring route till I got to Bosco's cafe in Te Kuiti.  I think I am becoming some what of a  local there as it is about the fifth time I have stopped here over the last few months.  My plan was to head towards Taumarunui , but before getting there I  made a right hand turn about 30kms before.  This took me towards Matiere and Ohura. 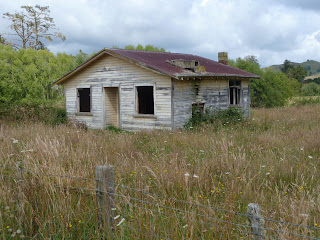 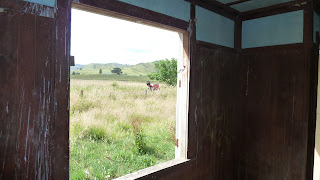 The first thing you notice is the sign at the beginning of the road that informs you there is no fuel for 150kms, I had all ready anticipated that so had all ready re fulled.  The road itself is a back country road, often the seal is rough, and you just never know what lies around each corner.  Within a few Kms, I had encountered a couple of goats and a sheep, as well as a couple of rocks in the middle of the road.
The weather was sunny but not yet hot, and I was enjoying myself immensely just  meandering along at a slow but steady pace.  I saw no reason to speed and was enjoying taking in the smell and sights.   (besides this is no place to come off a bike )  There is literally no body here,  in fact for the next 90kms till I got to Whangamomona I only encountered a hand full of cars, a group of adventure bikes that went past when I had stopped to take some pics, but that was it.  The silence is.......Audible!
Matiere consist of nothing but run down house, and Ohura is not much better.  It must once of been a thriving rural town, but urbanisation and the advent of better roads and technology I presumed have killed it.  I would have to agree with Geoff, as a place for a "Deliverance" movie it would be ideal.  It has a scary feel about it............ 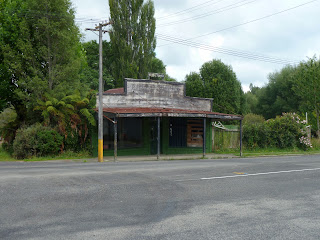 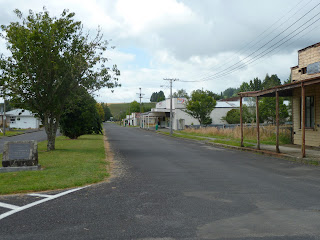 It was slow progress , and as I travelled over the Tahora saddle I was amazed at the spectacular scenery, and the vastness of it all.   The 12km or gravel that you need to contend with on the way to Whangamomona is not difficult at all and when I finally arrived I was looking forward to lunch.  A few bikes were all ready parked up, and as I got chatting to a couple  the guys, they seemed some what surprised that I had come from Auckland......I seem to be getting that a lot lately.  At this point of the trip I had travelled 350kms and it had taking me 5 1/2 hours.
What a charming "Republic" it is, with fantastic food, friendly and helpful staff who and couldn't do enough for you.  I spent an hour relaxing and taking in the place. 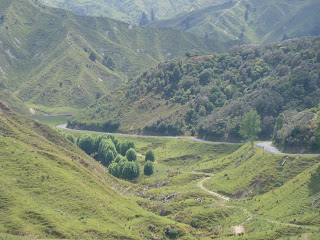 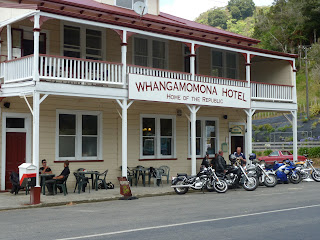 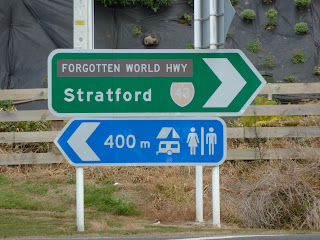 Leaving "The Republic" I headed towards Stratford where there is plenty more fantastic scenery to take in on  the way.
I refulled in Stratford and decided a trip around Mt Taranaki was in order.  Not motorcycling heaven by any means with most of the roads being fairly straight, but the mountain is just awesome and you can not but enjoy the ride in its shadow.  I arrived in New Plymouth about five. A ride of over 530kms for the day, and a lot of it demanding.  Still a hot shower and a cold beer, and I think I could of done it all over again. 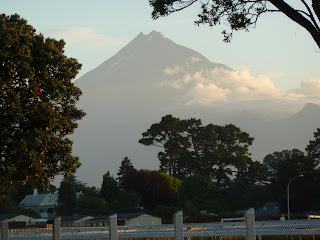 Sunday morning arrived and I was again on the road by 6.30.  I had decided to head North and then take the inland road to Ohura  (I must be their most famous tourist, twice in two days), then back onto HWY 4 and home. 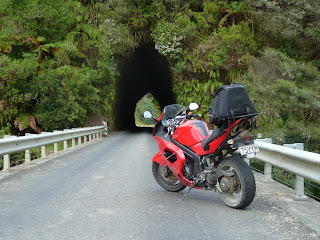 It was a pleasant early morning ride, and once off the main road and heading towards Ohura I discovered plenty of wondering sheep and goats.  It was again quiet and I had the road to myself, after passing the turn off to Mt Damper Falls (Note to self to  do that next time), the road unexpectedly turned to gravel.  I continued on as there was only 37kms to go to get to Ohura, and I thought there can't be to much of this gravel.  After about 4 kms the gravel road turned to a gravel track!
So here I am, in the middle of now where, 8.00am on a Sunday morning, fully laden with fuel and luggage, riding a sports tourer, on a gravel track, that in all honesty you would be hard pushed to call a road......I think I am having an adventure .  Well no point turning around, so I continued on and hoped like hell I don't end up having to push the bike through a stream or something.  When I finally got through it I must admit I had a sense of accomplishment, but was ever so glad to be back on tarmac.!! 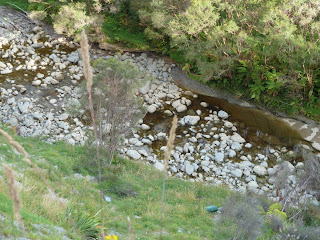 Once rejoining HWY 4 I basically headed home following the same road I had ridden coming down. I had done 900kms for the weekend,  it had been a great ride,  I felt that I had accomplished some of what I wanted to do.

View Larger Map
Now, where is that brochure on the new Triumph Cub......I know the exact road I want to test ride it on...
Posted by Roger at Saturday, January 15, 2011